“1792 Sweet Wheat is a wheated bourbon, aged eight years at the Bardstown facility. (The standard 1792 uses rye.) Fret not about flavorings or added sugar. There’s nothing overly “sweet” about the whiskey beyond the house style of the whiskey itself; the sugars are derived from standard barrel aging the same way they are in any other straight whiskey.

1792 Sweet Wheat starts off not with sugar but with lumberyard notes; the nose is surprisingly forward with wood, tempered with tropical notes and a touch of peach. On the palate, it’s not especially sweet either, offering notes of tinned fruit, coconut, cinnamon, ample vanilla, and some gingerbread notes coming up the rear.” Drinkhacker.com 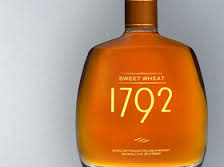 “Golden brown in color, the nose has many of the signature characteristics of Stitzel-Weller whiskey including bright green apple, banana, cinnamon spice, and oak. While there’s no age statement on this Blade and Bow (and with the solera system, age statements get muddled), it’s clear from the strength of the oak on the nose that there are some older stocks in this whiskey. The aromas on the nose are fairly well integrated, and although it’s spicy, it’s far less fiery than we’d expect at this ABV.

The entry for Blade and Bow is light and a little thin, much lighter than expected. The green apple and banana from the nose are there, along with caramel and a flash of the oak spice from the nose. In the midpalate, the oak spice ramps up a bit and is joined by black pepper and cinnamon. The level of spice is fairly balanced and light. Underneath, the spice is the tart green apple note from the entry. As with the entry, the finish is shorter and lighter than expected. It’s slightly dry and tart with just a hint of that oak spice.” Drinkspirits.com

“Barrel Hitch is an american whiskey bottled at 80 proof – The brainchild of two professional women with a passion for spirits, Master Distiller Mel Heim and Chief Branding Officer Carrie Earles, Barrel Hitch American Whiskey embodies the idea that all whiskey is not created equal. Whiskey is a complex, layered spirit that does not need embellishing for the sake of inclusion. What is more tempting than brown sugar and vanilla? Buttery oak and a silky body? Barrel Hitch was created with one goal in mind: Let’s make a whiskey for everyone. Bottled at 80 proof, Barrel Hitch American Whiskey hits the mark with a smooth body and notes of toasted oak, green apple and vanilla. This remarkable profile is the result of a meticulous blending process of numerous finished whiskey sources. This step is a crucial part of exacting the whiskey as every barrel contributes a unique scent, flavor, mouth feel and color that ultimately must be balanced for consistency and quality. This approachable spirit is a shining example of how science and art, when properly executed, form a harmonious union that redefines the standard.” eastsidedistilling.com

“Barrel Hitch Oregon Oak is an american whiskey bottled at 88 proof – Here we took the southern stand-by and brought it home to the Northwest. Oregon’s diverse climate grows a rare, drought resistant oak that was primarily used as fire wood as it was hard to season without warping the planks. However, some clever vintners knew the potential of the mighty oak that no one wanted. Motivated by the rising cost of importing French varietals and the importance of making the craft more sustainable they set off on a grand experiment that changed the cask landscape forever. As luck would have it the resulting wines were brilliant. Today there is a two year wait for new barrels and we’re proud owners of a small handful available. These are used as agents for a second aging of our Barrel Hitch which we will rest up to 4 months. The resulting whiskey is layered with high octane flavors from the first barrel and a smattering of savory spice from the second.” Eastsidedistilling.com

Make sure you stop by and check out all of the new Whiskeys that we now have in stock.(All quotes in this blog have been taken directly from the new products bottle description/or website/or review websites, and do not necessarily reflect East Bend Liquors opinion of the products).