“A five-time Emmy Award-winning journalist, Ronald Joseph Aaron Ron Burgundy was the co-anchor of KVWN Channel 4 News Team in San Diego (pronounced San De-aago) from 1964 to 1977. “I don’t know how to put this, but I’m kind of a big deal,” says Burgundy, about himself. “People know me.”

Ron Burgundy Great Odin’s Raven Special Reserve Scotch Whisky is a blend of 60% malt whisky and 40% grain whisky sourced from the Speyside, Highlands and Islay regions of Scotland. “It has a formidable scent,” says Burgundy. “It stings the nostrils – in a good way.”The aroma gives way to notes of rich mahogany and old, leather-bound manuscripts. Needless to say, this Scotch is not available at the Toilet Store. In addition, studies suggest that 60% of the time, this whisky will get you drunk everytime.

“I love Scotch,” says Burgundy. “Scotchy, Scotch, Scotch. Here it goes down. Down into my belly.”Pick up a bottle today!” For more info head on over to Caskers.com. 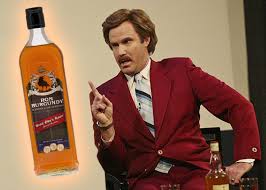 TheWhiskeyExchange.com had this to say about the Russian vodka- “A classic Russian vodka, clean and crisp with a little bit of grain flavour. Perfect for drinking straight, as is the Russian way, Beluga has become a huge word of mouth success story since first pitching up on these shores in 2009. Beluga is made, unusually, with barley malt spirit, and is very lightly flavoured with honey and extracts of oat and milk thistle.”

For more information about this vodka and the distillery click here to be directed to their website.

“Kirk and Sweeney 12 Year Old Rum is a rum crafted in the Dominican Republic from raw sugarcane. After being distilled, the rum is aged for twelve years in American oak casks. As a result, it has deep mahogany color along with an aroma of earthy sugar cane and vanilla. The initial flavors of sweet nectar and honey give way to notes of oak and toffee. The finish, which is bold and ripe, ends with a smooth vanilla kick.”

“Kirk and Sweeney 12 Year Old Rum earned a score of 95 points from Wine Enthusiast, which named it one of the Top 50 Spirits of 2013, and was called one of the Best New Rums of 2013 by Liquor.com.” For full tasting notes head to Caskers.com 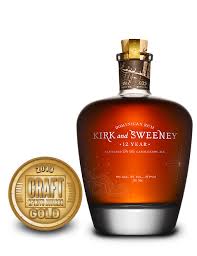 Make sure you stop by and check out the new products! (All quotes in this blog have been taken directly from the new products bottle description/or website/or review websites, and do not necessarily reflect East Bend Liquors opinion of the products).