As we approach the Fall season, we thought it would be fun to look into the difference between Porters vs Stouts, as they are traditionally thought of to be colder weather beers. Keep in mind that we supply some of these beers right now, and will be carrying more as the season progresses. Cheers!

“Let’s just say this right off the bat: trying to understand the difference between a porter and a stout in today’s craft beer world can be a pretty dizzying experience. That’s because over the past ten years or so, in many craft circles, the names have been used pretty interchangeably when categorizing darker beers. It’s this occurrence that caused us to want to understand the different nuances between these two types of beer, because more often than not, someone will tell us they prefer one to the other or a recipe will call for one specifically, and yet it’s pretty hard to find a person who actually knows the difference.

To truly understand the difference between these two dark beers, we have to go back to where it all started in the first place: England. Out of the rowdy pubs of London in the eighteenth century emerged the porter, a dark,

medium-bodied beer which had lots of malty goodness that was balanced by quite a bit of hops. Earliest reports of the beer’s creation claim it was initially invented by a barman in the pub, made by blending lighter, hoppier beers, with older aged ales – sort of like the Suicides you made at the soda fountain when you were a kid. The result was a drink that took off, and eventually brewers reverse-engineered the mix and started brewing porters, no mixing at the bar needed.

As more brewers across England made porters, experimentation naturally followed. Brewmasters would tweak recipes, add different ingredients and boost the alcohol content, and thus the stout was born. That’s right, all a stout technically is, is a stronger – or stouter – version of a porter. In fact, its original name was “stout porter.”

with the creamy, luscious libation they started assuming came with drinking a stout.” vinepair.com

“Roasted barley became a permitted ingredient in beers in the United Kingdom (which still included Ireland at this time) in 1880, with the passing of the Free Mash Tun Act. However, there was no rush to start using it: one writer in 1885 insisted that roasted barley did not give as permanent a colour as roasted malt, and “the flavour is also very inferior; and the aroma can bear no comparison.” Guinness in particular does not appear to start using roasted barley in its stouts until around 1930.

The First World War, and the high taxes and restrictions on beer that it brought, did terrible and permanent damage to the strengths of beers in the British Isles, and by the 1920s porters were down on average to around 3.6 per cent alcohol by volume, and stouts to only 4.7 per cent or so. Guinness Extra Stout, which had been around 7.7 per cent alcohol in the 19th century, was down to 4.4 per cent in the 1930s. 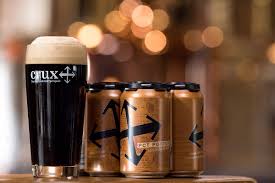 When the “small brewer revolution” started in Britain and the United States in the 1970s, there was more than 250 years of different styles and strengths of stout and porter to choose from, and different brewers picked different sorts to recreate. The result is that, in some cases, some brewers now brew “porters” that are stronger than their stouts. The need to categorise beers for brewing competitions in the U.S. has meant a plethora of micro-managed style descriptions, few of which, however, have any historic validity.

The answer to the question: “What’s the difference between a stout and a porter” is that originally a stout was simply a strong version of porter: today the difference is whatever you want it to be.” beerconnoisseur.com

(All quotes in this blog have been taken directly from the new products bottle description/or website/or review websites, and do not necessarily reflect East Bend Liquors opinion of the product)